Modulation Like No Other Sampler
The EXS24 mk II is the ultimate sampler for the Logic series. Its outstanding sound quality — up to 24bit/192kHz — and flexible synthesis engine make it the ideal choice as the central instrument for professional audio and music productions. The powerful 10 channel modulation matrix, borrowed from Emagic’s ES2, offers extensive modulation possibilities that are simply not available to other software samplers. Every modulation source – even the side chain level – can be linked to every modulation destination. Fading between different modulation sources is possible as well.

Filter may be switched off to increase polyphony

The Concept
The EXS24 mk II – the advanced successor to the renowned EXS24 software sampler – features sample rates up to 192 kHz and 24 Bit, providing stunning sound quality and an exceptional wide dynamic range, thanks to its 32 Bit internal processing. Its ergonomic user interface offers easy access to a comprehensive sample and synthesis engine. Sample memory is only limited by computer Œs RAM or by the hard disk space when using VSM (Virtual Sample Memory). Its perfect integration into the digital mixing system of Logic provides up to 16 individual outputs per unit, full automation and access to all of Logic’s internal effects. Songs are quickly loaded, including sound settings and sample instruments. Its exceptional sonic quality and superb performance make the EXS24 mk II the ideal sampler for your Logic system.

The Synthesis Engine
The first-class sound manipulation capabilities of the EXS24 mk II breathe life into any sampled instrument. The core of the EXS24 mk II’s sound sculpting capabilities revolves around a superior multi-mode filter with adjustable slope, variable filter overdrive amount, and a fatness circuit which ensures excellent low frequency response, even at high resonance settings. Utilizing a flexible modulation matrix, modulation sources such as the three LFOs, the 2 fast envelopes, MIDI controllers or the amplitude of a sidechain input, are routed to destinations such as sample start, sample select, pitch, glide, volume, pan, envelope time, and several parameters of the LFO and filter. The modulation amount can even be controlled by another source. Mono and legato modes support the most expressive and subtle of playing styles for solo instruments.

The Interface
The innovative, ergonomic user-interface of the EXS24 mk II takes sampler use to a new level of simplicity: no more tedious searching through endless menus and dealing with minuscule displays. With the EXS24 mk II, you have a complete, at-a-glance overview of your sound settings. Totally integrated access to Logic’s Stereo Sample Editor ensures that formerly demanding tasks, such as looping or time-stretching, are handled with ease. To aid you in the management of your instrument library, the EXS24 mk II features an exceptionally easy to use hierarchical menu structure. This is user-defined, allowing you to organize your samples to meet your needs. There is even a search facility. All of these creative solutions ensure the most efficient workflow, allowing you to effectively realize your production ideas. 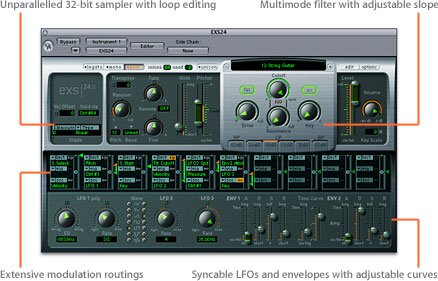