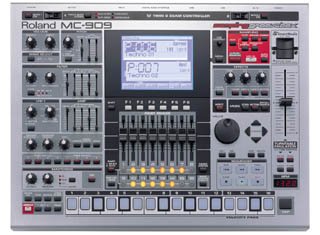 Get MC 909 Sounds from Gotchanoddin.com. The wav sounds will import directly via the wav import into the MC 909.

The MC-909 is Roland’s answer to the demands of serious producers who want a workstation that seamlessly integrates audio and MIDI. Based on a new generation XV synthesis engine with up to 272MB of sampling RAM*, the MC-909 has evolved beyond the original concept of a Groovebox. This professional workstation also boasts 800 new Patches, 64 Rhythm Sets and 693 all-new waveforms with SRX expansion. And with professional sequencing, onboard effects, mastering tools and an ultra-intuitive interface — plus a USB port for exchanging samples and sequences with a PC — the MC-909 is all you need to take your music from conception to completion.

New V-LINK function for integrating audio and video in performance

The Fusion of Audio and MIDI
The MC-909 is more than a Groovebox with sampling. In fact, it’s really an integrated music production system. Now audio and MIDI can be integrated, synthesized and sequenced together within a single, easy-to-use environment. Sample some phrases and sequence them alongside MIDI tracks as the MC-909 synchronizes your loops automatically. Samples can even be used as raw waveforms in the synthesizer section, opening up a world of sonic possibilities.

Straightforward Programming
One look at the front panel and it’s clear the MC-909 is a serious machine. On the inside is a powerful 4-Tone synthesis engine with stereo waveforms per Tone and 64-voice polyphony. Yet the MC-909 is still as easy to program as an analog synthÖthanks to a generous supply of knobs, buttons and sliders.

Flexible Sampling with .WAV Import
The MC-909 comes with 16MB of sample memory, expandable up to 272MB using optional DIMMs. Audio can be recorded via the stereo analog inputs or digitally using the S/PDIF input. You can even import .WAV/AIFF files from a computer via USB — making it possible to tap into the many free samples on the Internet. And when your track is complete, simply resample the output and export it back to a PC for CD burning or distribution on the World Wide Web.

Chop, Stretch and Loop
Once recorded, a sample can be processed in a variety of ways. Using Wave Edit, a waveform can be truncated and looped while viewing it graphically on the LCD. The Timestretch function, on the other hand, makes it possible to change a loop‰s tempo without affecting pitch. Or, if you prefer to create your own loops, simply “slice” up a loop with Chop. And just like Roland’s professional samplers of years past, you can trigger samples chromatically from the velocity-sensitive pads or via an external MIDI keyboard.

Rock-Solid Timing and More
The MC-909’s sequencer has been improved in many ways. First, the resolution is now 480 TPQN for rock-solid timing. Patterns can also be up to 998 measures — great for those who prefer linear programming — and the pads are now velocity-sensitive! A new version of Roland’s popular TR recording method (similar to “Piano Roll” editing) makes it possible to view several notes at once using the pads and LCD. Best of all, the MC-909’s sequencer is fully compatible with Standard MIDI Files, allowing you to import and export SMF sequences via the built-in USB port.

Club-Ready Presets in the Latest Dance Styles
Like all Grooveboxes, the MC-909 ships with hundreds of fresh new patterns — programmed by professional producers — that fully exploit the new sounds. These hard-hitting grooves are guaranteed to rock the dance floor and include popular styles like UK hard-house, trance and the latest “broken-beat” hip-hop and R&B. Use the presets as a starting point for your own grooves or play them “as-is.”

Separate Reverb, Compression and MFX
There’s no need for outboard effects with the MC-909. To start, there’s a 24-bit reverb that can be applied to each sequencer part. And with the new dedicated compressor, you no longer have to sacrifice a multi-effect to get tight bass and drums. That leaves 2 independent multi-effects (MFX) for the new filter algorithms — including a 36dB filter and amazing Step Filter — plus tempo-synced delay up to four seconds*, phasing, distortion and other proprietary effects like Lo-Fi, Slicer and COSM Amp Modeling.

New Dedicated Mastering Effects
Topping of these killer effects is the dedicated Mastering processor. This special tool includes 3-band compression for creating “final” mixes with incredible clarity and punch. And dialing in the right setting is easy, thanks to dedicated knobs for each frequency band. Now producers have everything they need to take their music from idea to finished product. Just re-sample the mastered output and export it to a computer for CD burning and MP3 creation with your favorite software tools.

Easy Operation and Performance Control
The MC-909’s new LCD screen makes it easy to locate sounds, sample audio, edit waveforms and sequence MIDI arrangements. Nearly all major parameters can be accessed via knobs, sliders and buttons, while the dedicated Part Mixer makes mixing a snap. You also get two of Roland‰s most popular performance controllers: Turntable Emulation makes it possible to adjust pitch and time independently for MIDI or audio (thanks to some innovative realtime time stretching), while Twin D Beams use an infrared beam of light for triggering samples, tweaking filters and more.

An SRXpandable Sound Set
The MC-909 ships with a dance-oriented ROM containing 800 new Patches, 72 Rhythm Sets and 693 all-new waveforms exclusively sampled and created for this next-generation workstation. These sounds include everything from house pianos and organs to edgy techno hoovers and stabsÖplus favorites like the JP-8000 ‹SuperSawŠ waveform and distorted TB-303 sounds.

There are also plenty of basses, pads and sound effects perfect for any track, along with the most complete assortment of drum kits ever assembled.

New sounds can be added by installing an optional SRX-Series Wave Expansion Board. And if you choose the SRX-05 “Supreme Dance” expansion, you’ll get special Patches that can only be accessed on the MC-909. It’s a “must-have!”

* As the SRX-Series contains Patches for different “SRXpandable” models, the SRX sounds on the MC-909 may be different from other SRXpandable models. Also note that when using SRX-01/SRX-02, only waveform data is compatible.

USB Port for Easy File Exchange
While the MC-909 is designed to operate as a stand-alone workstation, it is also at home with USB-equipped PCs. This simple interface makes it possible to import or export .WAV/AIFF files with a computer, or even exchange Standard MIDI Files with software sequencers like Cubase, Logic and Performer. The MC-909 is truly an “open-ended” system that makes creating, sharing and distributing your music easier than ever before.

Convenient SmartMedia Storage
Another welcome feature is the MC-909’s SmartMedia slot. These optional memory cards can be used to store User data such as samples, Patches, Rhythm Sets and patterns — all on ultra-thin cards that literally fit inside your shirt pocket! SmartMedia cards are readily available at most electronics stores, making them a convenient and instant way to save and load data. And if you have a USB-equipped PC, you can read SmartMedia data right from the MC-909’s USB port.

Trigger Live Video with V-Link
Many creative artists have discovered the benefits of using audio and video together. With the MC-909’s V-LINK feature, you can integrate video with your Groovebox sequences. First, edit the video with the Edirol DV-7PR Digital Video Workstation (sold separately). Then use V-LINK to trigger clips, perform video effects and transitions from the MC-909’s sequencer and front panel along with the music. This futuristic workstation does it all!