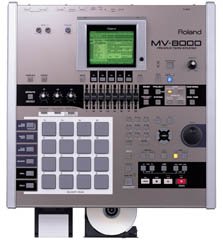 While there are other hardware studios on the market, none can compete with the MV-8000’s ability to quickly turn raw samples into song. With up to 101 minutes of sampling and compatibility with a wide range of audio formats, the MV-8000 offers unlimited possibilities. And sequencing is easy, thanks to 16 velocity-sensitive pads and a graphic LCD interface. Users can record up to 128 MIDI and eight audio tracks, apply effects and burn a CD-making the MV-8000 the first Roland product capable of handling every part of the production process.

From Sample to Finished CD
Thanks to the onboard CD-RW drive, producers can create entire songs armed with only an MV-8000 and their favorite CDs. The sampler can load sample libraries ranging from Roland and Akai to .WAV and ACID formats–all with just a few simple commands. Then it’s just a matter of tapping in some beats, arranging the song and adding effects before burning it all to an audio CD.

136 Tracks of Sequencing Bliss
The MV-8000’s sequencer section boasts total integration of audio and MIDI and up to 136 tracks of recording. These include 128 MIDI tracks (with 32-channel operation) and eight stereo audio tracks (16 mono) that can be used like a linear recorder. Program beats on the MIDI tracks and combine them with freestyle vocals or acoustic instruments on the audio tracks, including the ability to “punch in” at any time. The innovative MV-8000 can even sync audio to the sequencer’s BPM.

Compatible with Popular Audio Formats
When it comes to sound libraries, the MV-8000 offers compatibility with some of the biggest formats around-including the ability to import Akai MPC disks via the built-in floppy drive. Users can also load Roland S-700 Series libraries and .WAV/AIFF discs from CD-ROM or via USB transfer, and “rip” audio directly from CD. The MV-8000 also loads ACID files and can automatically calculate the bars and BPM, making it easier to work with loops. User sampling is also provided-complete with Phono inputs for sampling records.

Studio-Quality Effects and CD-RW Drive
The dream of a complete studio in a box becomes a reality with four dedicated effects processors and an onboard CD-RW drive. The MV-8000 delivers 24-bit Reverb, separate Chorus/Delay and a versatile MFX (multi-effects) processor with COSM effects made famous in Roland’s V-Studios. These include Roland COSM algorithms like guitar amp modeling, microphone and speaker modeling, plus unique tools like Lo-Fi and Slicer. A Mastering Tool Kit offers everything needed to sweeten up mixes before going to CD.

Massive 40GB Hard Drive
While audio and samples are played back using the onboard sample RAM, the MV-8000 can store its sounds and projects to an internal 40GB hard disk. This makes it easy to manage large sound libraries, once they have been converted to MV-8000 format, and it’s also a great way to load sequences quickly during performance. When connected via USB, the VM-8000’s hard drive can be accessed directly from a computer’s desktop.

Options Galore
By purchasing the optional MV8-OP1 expansion card, MV-8000 users gain six additional analog outputs, a digital input, plus an R-BUS port that can be used to transfer up to eight channels of digital audio to R-BUS equipped Roland V-Studios, or to ADAT-compatible devices using the optional DIF-AT Interface Box. And with Roland’s V-LINK technology inside, the MV-8000 can be used to trigger and manipulate video clips when used with optional video equipment from Edirol. So when it comes to sampling studios, don’t settle for second best. Get the Roland MV-8000.