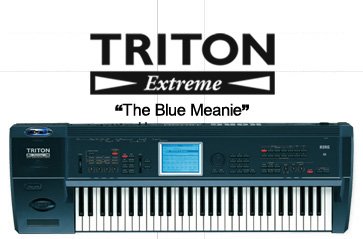 No doubt about it. This is the TRITON with attitude. The aggressive new TRITON Extreme is bursting at the seams with more of everything that has made the TRITON family the workstation of choice for tens of thousands of performers, producers and musicians the world over. Tricked out with vacuum tube processing, USB audio CD burning and data sharing, CompactFlash data storage, digital I/O and stuffed with sounds, it’s everything TRITON – taken to the Extreme.

More than Meets the Eye

When it comes to sounds, the TRITON Extreme is a treasure trove, delivering an out-of-the-box palette of sounds that is second to none. The preload data – created by the top programmers in the game – includes an incredible 1,344 Programs and 50 Drum kits. Add to that another 1,280 Combinations, each composed of up to eight Programs, split, layered, zoned and velocity allocated across the keyboard. We’re still not done; additional banks of GM Level 2 Presets contain 256 Programs and nine Drum kits. Let’s put it this way: say you wanted to spend a mere 10 seconds checking out each preloaded sound. Be prepared to add some overtime to your eight-hour day!

Twin tone generators combine to pump out a generous 120 notes of polyphony. Korg’s acclaimed Hyper Integrated synthesis engine provides breath-taking audio quality and an amazing degree of sound editing control. Each oscillator is processed through a multi-mode filter and multiple advanced envelope generators for precise sound shaping. Each of the two LFOs offers 21 waveforms, and each LFO can be synced to the arpeggiator, sequencer, or to your other MIDI gear. Plus, you can breathe new life into your sounds using 42 alternate modulation source (AMS) types and 51 modulation destinations. Supercharge your TRITON Extreme by adding six-voices of DSP modeling (stolen from the legendary Korg Z1) with the optional MOSS (EXB-MOSS) and leave everyone else eating dust.

Without equal as a synthesizer, TRITON Extreme is also a robust 16-bit, 48kHz sampler. Korg’s exclusive Open Sampling System unlocks the power and benefits of sampling from every mode. This opens the door to creatively resampling your TRITON Extreme performances – including performances enhanced by the sequencer playback and the arpeggiators. Auto-Setup functions automatically optimize multiple parameters for a variety of sampling situations. By far, one of the most important features of the TRITON Extreme’s sampling engine is “In Track Sampling,” where you can sample audio directly into the sequencer as it plays. The possibilities are endless, but now you can add vocal lines, guitar solos and other audio performances to your sequenced songs! Finally, you can sample or resample directly to CompactFlash or Microdrive media. Resampled songs saved to media can be converted to audio and burned to CD via USB.

Korg’s new tube-driven Valve Force circuitry can be used as an insert effect or on the final outputs, adding just the right amount of warmth or snarl to your sound. You can even sample an external sound through the Valve Force circuit to impart “tube” quality to the sound. Valve Force has proven itself in Korg’s ESX-1 and EMX-1 Electribes. The enhanced version in the TRITON Extreme provides that same fullness of tone and also incorporates an Ultra Boost element designed to punch up the low end without muddying up the sound.

In addition to Valve Force, TRITON Extreme also dishes out a generous serving of five Insert effects, two stereo Master effects as well as a Master EQ effect for eight simultaneous effects. Multiple timbres can be routed to the same Insert effect, and you can chain Insert effects together to create outrageous custom multi-effects. Master effects can run side by side or in series for maximum flexibility. Effect parameters are freely editable, can be modulated in realtime and are saved with the sound. Insert effects draw from a deep well of 102 effect types, and there are 89 Master effect types. Effects can be applied to both internal and external sounds, even as a sound is being sampled. By resampling an effect laden performance you can free up effects and use them over and over.

How do you rein in a beast with this much power? In addition to its mighty and intuitive TouchView display panel, TRITON Extreme provides an array of unique realtime controls, including a joystick, ribbon controller and two assignable switches. Four realtime control knobs can switch between Valve Force parameters (Input Trim, Ultra Boost, Tube Gain, Output Level), sound editing functions (Cutoff, Resonance, EG-Intensity and Release) or any four parameters of your choice – including controlling external MIDI gear. The back panel accommodates multiple pedal types that can be assigned to a variety of functions.

TRITON Extreme is one daring and dangerous performance instrument, and it’s also an amazing compositional tool. Sixteen tracks, 200 songs and 200,000 notes are just the beginning. Step time, real time, looping and pattern based recording modes allow you to capture your musical ideas your way. Sequencing is so much more than just record and playback, and TRITON Extreme delivers the tools you need to polish your songs into gemstones. Quantize functions tighten up your timing or add swing to a steady beat. Twenty-four Tone Adjust parameters let you quickly edit the timbre assigned to any track without exiting the sequencer, and leave the original program untouched. Sys Ex recording allows you to automate your mix in new and creative ways – muting tracks, soloing others, loading new effect programs during different sections, and more. TRITON Extreme also uses song “templates” to give you a head start when laying down tracks. Each template assigns timbres to each track, assigns and routes effects, and can even offer up a variety of rhythm patterns to get you going. Sixteen song templates, each tuned to a different musical style, are preset and you can also create 16 all your own, eliminating repetitive steps when you want to get your ideas down.

If you’d like to work on your masterpiece in smaller chunks, you can compose individual songs for the verse, chorus and bridge etc.; the Cue List function allows you to string these individual parts together. Once you have decided on the right order – and you can try a number of versions – simply convert the Cue List into a single song. You can also create your hits from even smaller building blocks. With Korg’s Realtime Pattern Play and Record (RPPR) function, short sequenced patterns can be assigned and played back from individual keys on the keyboard.

Behind the Scenes Muscle

Its not just what’s up front that counts. The TRITON Extreme’s back panel is decked out with all the trappings a modern synth should have. In addition to the main left and right outputs, there are four assignable individual outputs to send your sound where you want it. Two audio inputs with adjustable gain and MIC/LINE level switching allow you to sample from a wide range of sources, as well as access the internal effects. Digital In and Out is provided in S/P DIF optical format. Here you’ll also find the CompactFlash media slot, MIDI connectors, and the damper/footswitch/footpedal jacks.

Welcome to the USB Universe

We saved the best for last. Two USB connection ports open up a world of possibilities. By connecting a CD-R/RW drive to USB Port A, completed songs (once they have been resampled as .WAV files) can be burned to CD as audio. This connection also allows you to use external USB data storage units with the TRITON Extreme. USB Port B allows an external computer to access the media in the CompactFlash slot, allowing you to share files back and forth.

One Is Not Enough

TRITON Extreme is available in both 61 and 76 key synth-action models – both with variable velocity and aftertouch response. TRITON Extreme 88 is equipped with our premium RH2 keybed, featuring progressive graded hammer action, aftertouch, and an authentic piano feel. Try out the latest TRITON – and take your playing to a new Extreme…